These pieces were produced in connection with the Combaz7 artist-in-residence program in Cran-Montana, Switzerland. This project consists of a photograph and a video work that were produced as a collaboration with Takayoshi Tsuchiya (Conceptual artist, Japan). Videos and still-photographs that I took at various locations within Cran-Montana region served as material for the assembly of new landscapes. For the finished works, a large-format Giclee-print and high-resolution video imagery (2K resolution) were joined together on multiple monitors using synchronized projectors.

As participants in the AIR program, I decided I would attempt to reconstruct the landscape using a painterly approach, without getting directly involved with the region’s history and customs at first. This approach entailed the use of a japanese-style structure and pictorial composition in the manner of Japanese folding screens and other classical art pieces. That is to says, I selected Swiss Landscapes based on a Japanese sense of space, which differs with the sense of spaces within the Western tradition. The questions that concerned us were several : How would a Swiss person perceive such a landscape, i.e., a Western Landscape with only its spatial structure and composition altered ? Would it even be possible to produce such a landscape or the conditions surrounding it ? The answers to these questions were exactly the things that interested us in the project.

In the reconstruction of Swiss landscapes, The one of reference was the composition and spatial structure used in a painting done on“Birds and Flowers of the Four Seasons”, a folding screen by Kano Eino, a Kano school artist of the early Edo period of Japan, collection of Museum of Fine Arts, Boston. I constructed

“commonplace”mountain-scales of the kind often seen in Crans-Montana with the various fragments that constitute the image’s structural elements (synthesis material), deliberately avoiding the use of the deformation, flattening and other manipulations typically found in classical Japanese painting. Thus, upon closer inspection, the perspective (scale relationships), the directionality of light and time axis would be randomly disordered. The result is a world which is real in part, but one that has lost its controlling order, one that conveys an undefined dissonance that is disturbing to us, a world whose parallel aspect is that of a fictional landscape that embraces both a different place and a different time axis.

These words are an experiment in the creation of detailed imitations of Japanese pictorial space using European climate and landscape as raw materials.

Facing“Winter Landscape”.
To someone accustomed to conventional Swiss scenery, this landscape may seem odd.
To someone from afar, it may appear beautiful in a new kind of way.
To a Japanese person, it may feel somehow familiar, even nostalgic.
Are the memories behind these impressions merely concepts constructed around the idea of a landscape, or are they memories of landscapes actually seen?

Nature in Japanese painting arises from a process of imitation whereby the original undergoes slight deformations and alterations with each iteration. It is a form of expression which subsumes the expression of concentrated time.
In Japanese landscapes such Birds and Flowers of the Four Seasons, a series of folding screens by Kano Eino (1631-1697), one senses a constant“movement”in the deformation and alteration. At first glance, Japanese scenes of the four seasons from this era seem to be highly decorative. The background lacks three-dimensional depth, the plants are highly deformed, and the butterflies and other creatures are twisted into unlikely shapes.

There is a strong sense of“intentionality”in the extreme deformation and decorativeness. This is, however, not a case of an individual artist’s whimsy. From the original act of observation into quotidian life that is the act of“drawing (shasei in Japanese)”, the deformation and decorativeness are the final result of being passed along by many other artists as tradition.

There is no boundary between an“artificial”depiction and a“true”depiction. In Japan, this ideaof“drawing”embracesbothdrawingfromreallife-ofaflowerforexample- andthecopying of a flower that was drawn by another person. In multiple folding screens done by different artists, one finds iterations of the same flower, the some stone, the same partial landscape.

A given flower copied from one painting to another, by one pair of eyes then another, becomes deformed and altered a little at a time over the years. The reality seen by the original artist changes gradually to the point of appearing contrived to someone else.
It becomes the basis for the act of“drawing”as a“search for the true essence of nature”.

A landscape that grows hazy before our eyes is a complete abstraction from reality. Depending on the memory of the viewer, it may become at some point something unreal floating in space.

Within the context of a Japanese landscape, however, it seems both are manifestations of the same things. 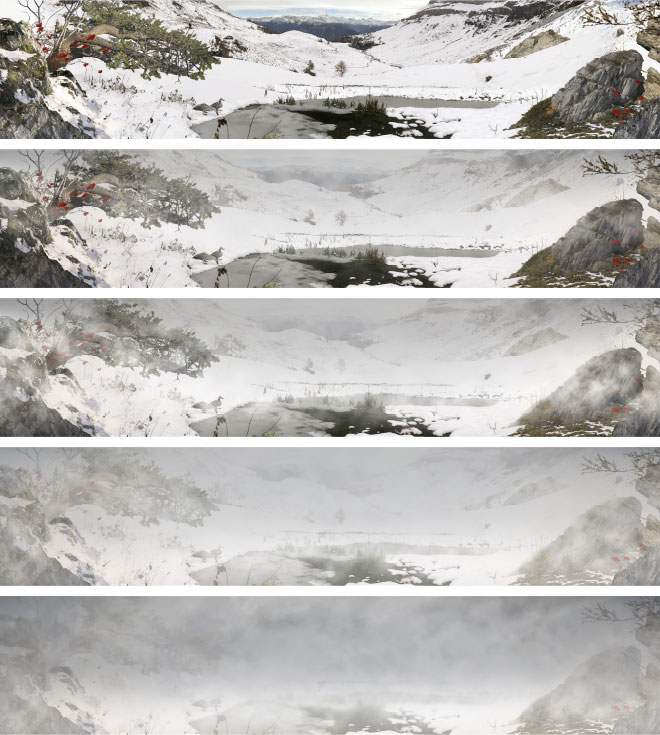