These piece are animation that are combined profiles of models and paintings from the 14th and 15th centuries. Depending on the space, sometimes five images are projected on walls or sometimes with five displays hanging on walls like five paintings are hung on walls. I created my pieces based on original paintings, which I reproduced in a video using a model with similar lighting and with a DSLR camera, which brings the image back to the real world.

When the scenery in a painting with two dimensions is reproduced in the real world with three dimensions, the difference between both the painted scenery and the real scenery becomes clear. Transforming our daily life in paintings, which appear strange and curious, is further away from what is usually natural.

However, the scenery becomes strange, It suddenly shows us a juxtaposition of nature and reality when It changes from a picture to a video, from a still one to a moving one. I think that even though I changed the image, the movement is in time. So, when the image begins moving, it feels like we are getting a glimpse of humanity, a real life.

In this piece“Portrait of It”, I combined profiles of models and portraits drawn in the 14th and 15th centuries. I took photographs of profiles of five models and I transformed outlines of those profiles along with ones of the five base portraits. When I started to modify the faces of models making expressions to fit with the base portraits, The faces started to lose humanity and to be impassive. However, The moment that they started to move as an animation work, It seemed as if they had lives and they were so much more vivid than I expected, which made me feel that they strongly hope to get their natural humanity back. 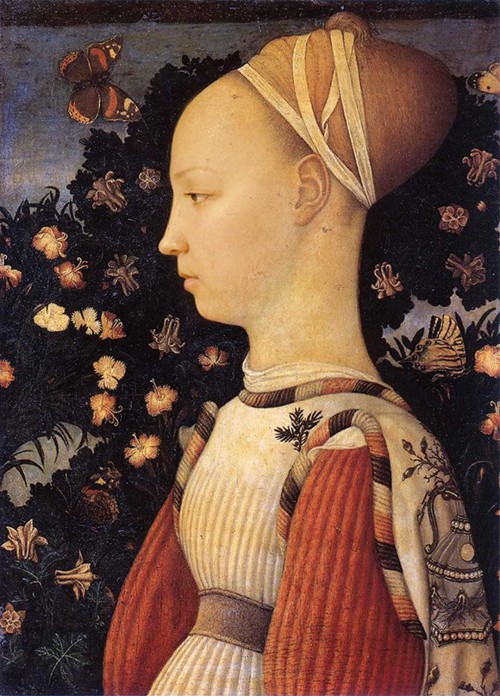 1. I chose five portraits drawn in the 14th and 15th centuries, selected models for the five paintings, and posed each of five models. I set the lighting of photography to imitate the lighting inside each of the five pictures.

2. I fixed SLR Digital Camera and let the model sit in front of camera and change expression slowly one by one. They had been talking, brinkling, yawning, and singing freely. I took photographs about 300 pictures of each one, so in total about 1.500 pictures were taken. In the photography, I let one of models turn around toward the camera gradually.

Left : Model’s face taken with SLRD camera, before processing
Right : Base portrait “: Portrait of Sigismondo Malatesta”/ c.1450 / Piero della Francesca
Middle : The face composed of the model’s one with the base portrait, after processing.

3. I input 1.500 model’s pictures taken on 2 to PC. I selected one basic face for each model (Left one) . I cut the necessary parts from the whole face, transformed them and fit those to the form of base portrait, and I created a face composed from the basic face of the model with the base portrait (Middle one). After that, I created different patterns with various parts of the eyes, mouths and noses on the composed basic face, and created the movement.

In this piece, I combined actual objects and paintings directly not setting a set like a base portrait. I transformed and modified only objects (model’s face, left one) in principle, I didn’t touch the base portrait (right one). I felt that these kind of pictures have a strong sense of the horizontal and the vertical through a whole process. In these paintings, The lines of the eyes, under noses, lips and necklines are drawn horizontally. Compared to these, The front of the face drawn parallel to the line of the neck, and the form of the neck, head, and the body is set vertically. I think that we receive an impression which is impassive and inhuman from these portraits because the modified form is far from a natural human.

Our necks are connected to our bodies slanted, so the length of the front of the neck and the back of the neck are similar. But, In these pictures, The backs of the necks are so long that they are strange. To continue the process, I drew in their chins first, and I increased the volume of the upper part of the head while decreasing the lower part. I modified the necks vertically, and pulled the corners of mouths up to be parallel with the eyes and noses. Then I removed all of hair, and I adjusted long neck lines. Consequently, the figures do not deviate from a 14th century ideal. They are inflexible. Greater priority is given to the order of painting than to the models humanity, as it actually appears in real life.